The Egyptian’s inventions were many and it might be easier to list the things they did not invent such as the wheel; not unexpected in a country where everyone travels on water. 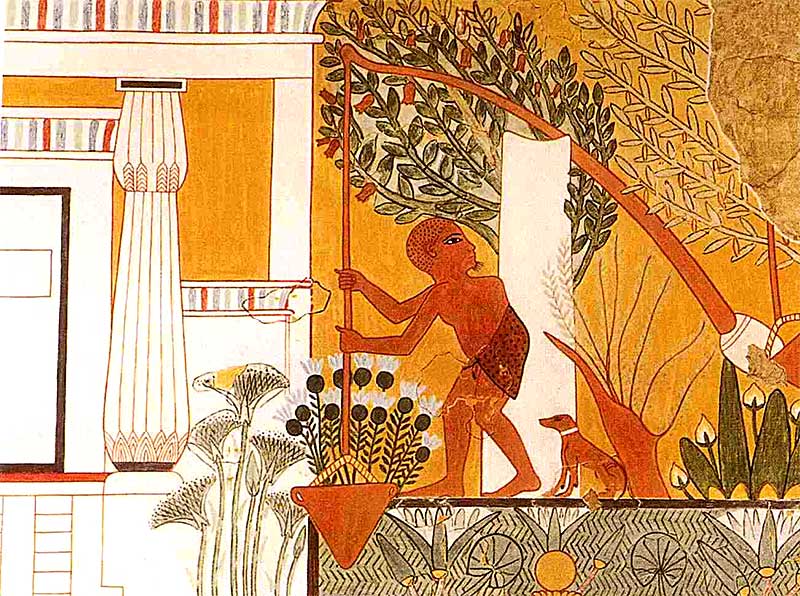 Most scholars now believe that isolated civilizations first arose independently at several locations; initially in Mesopotamia around Tigris and Euphrates rivers and, a little later, in Egypt and the eastern Mediterranean. Other civilizations arose in Asia along the Indus River in modern India and the Yellow River in what is now China.

All these early civilisations had to invent or discover everything for themselves because unlike later civilisations such as the Greeks in the west or the Chinese in the east, they had no one to learn from. Therefore, the Egyptians had to invented mathematics, geometry, surveying, metallurgy, astronomy, accounting, writing, paper, medicine, the ramp, the lever, the plough, mills for grinding grain and all the paraphernalia that goes with large organised societies.

So how do we define Egyptian inventions today? It is very difficult to determine because three thousand years is a long time for discoveries to be made and lost or appropriated by others. For example the Greeks sometimes take the credit for inventing mathematics but they learned their math from the Egyptians then later developed and improved upon what the Egyptian achieved.

3000 BC appears to have been a critical time for the development of technology, especially metal making. The Egyptians as well as the Mesopotamians independently discovered that by mixing a small quantity of tin ore with copper ores they could make bronze which is harder and more durable. This set off a chain of connected innovations that could not have happened without the primary discovery. 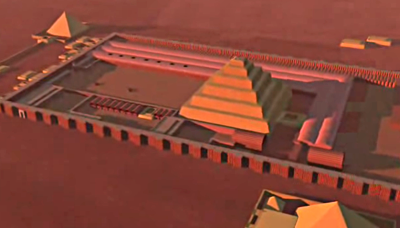 The oldest pyramid was erected for King Zoser between 2667-2648 BC. In fact it is the first monumental stone building designed and constructed that we know of.

Along with the Mesopotamians, the Egyptians were the first people to develop their language into a codified form of writing. All early forms of writing were pictograms – pictures. All writing systems developed in this way but their original forms become lost as the pictures are refined into abstract forms. What is interesting about the Egyptians is that although their writing changed to the abstract form of Hieratic they deliberately preserved the hieroglyphic pictures in their original forms.

Papyrus sheets are the earliest paper-like material – all other civilisations used stone, clay tablets, animal hide, wood materials or wax as a writing surface. Papyrus was, for over 3000 years, the most important writing material in the ancient world. It was exported all around the Mediterranean and was widely used in the Roman Empire as well as the Byzantine Empire. Its use continued in Europe until the seventh century AD, when an embargo on exporting it forced the Europeans to use parchment.

The Egyptians mixed vegetable gum, soot and bee wax to make black ink. They replaced soot with other materials such as ochre to make various colours. 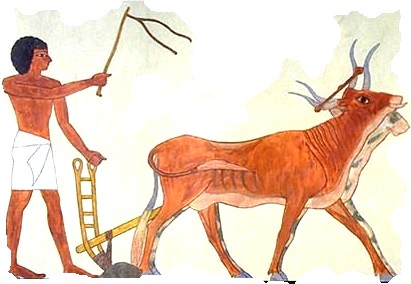 Using the power of oxen to pull the plough revolutionised agriculture and modified versions of this Egyptian invention are still used by farmers in developing countries around the world.

The sickle is a curved blade used for cutting and harvesting grain, such as wheat and barley.

The Shadoof is a long balancing pole with a weight on one end and a bucket on the other. The bucket is filled with water and easily raised then emptied onto higher ground.

The Egyptians devised the solar calendar by recording the yearly reappearance of Sirius (the Dog Star) in the eastern sky. It was a fixed point which coincided with the yearly flooding of the Nile. Their calendar had 365 days and 12 months with 30 days in each month and an additional five festival days at the end of the year. However, they did not account for the additional fraction of a day and their calendar gradually became incorrect. Eventually Ptolemy III added one day to the 365 days every four years.

In order to tell the time Egyptians invented two types of clock.
Obelisks were used as sun clocks by noting how its shadow moved around its surface throughout the day. From the use of obelisks they identified the longest and shortest days of the year.
An inscription in the tomb of the court official Amenemhet dating to the16th century BC shows a water clock made from a stone vessel with a tiny hole at the bottom which allowed water to dripped at a constant rate. The passage of hours could be measured from marks spaced at different levels. The priest at Karnak temple used a similar instrument at night to determine the correct hour to perform religious rites.

During the Old and Middle Kingdoms order was kept by local officials with their own private police forces. During the New Kingdom a more centralized police force developed, made up primarily of Egypt’s Nubian allies, the Medjay. They were armed with staffs and used dogs. Neither rich nor poor citizens were above the law and punishments ranged from confiscation of property, beating and mutilation (including the cutting off of ears and noses) to death without a proper burial. The Egyptians believed that a proper burial was essential for entering the afterlife, so the threat of this last punishment was a real deterrent, and most crime was of a petty nature.

“They went to the granary, stole three great loaves and eight sabu-cakes of Rohusu berries. They drew a bottle of beer which was cooling in water, while I was staying in my father’s room. My Lord, let whatsoever has been stolen be given back to me.” (Eighteenth Dynasty)

The Edwin Smith Papyrus shows the Egyptians invented medical surgery. It describes 48 surgical cases of injures of the head, neck, shoulders, breast and chest. It includes a list of instruments used during surgeries with instructions for the suturing of wounds using a needle and thread. This list includes lint, swabs, bandage, adhesive plaster, surgical stitches and cauterization. It is also the earliest document to make a study of the brain. The Cairo Museum has a collection of surgical instruments which include scalpels, scissors, copper needles, forceps, spoons, lancets, hooks, probes and pincers.

During the hot summers many Egyptians shaved their heads to keep them clean and prevent pests such as lice. Although priests remained bald as part of their purification rituals, those that could afford it had wigs made in various styles and set with perfumed beeswax.

The Egyptian invented eye makeup as far back as 4000 B.C. They combined soot with a lead mineral called galena to create a black ointment known as kohl. They also made green eye makeup by combining malachite with galena to tint the ointment.
Both men and women wore eye makup; believing it could cure eye diseases and keep them from falling victim to the evil eye.

At the 2003 dental conference in Vienna, dentists sampled a replication of ancient Egyptian toothpaste. Its ingredients included powdered of ox hooves, ashes, burnt eggshells and pumice. Another toothpaste recipe and a how-to-brush guide was written on a papyrus from the fourth century AD describes how to mix precise amounts of rock salt, mint, dried iris flower and grains of pepper, to form a “powder for white and perfect teeth.”

The Egyptians were so expert at preserving the bodies of the dead that after thousands of years we know of the diseases they suffered such as arthritis, tuberculosis of the bone, gout, tooth decay, bladder stones, and gallstones; there is evidence, too, of the disease bilharziasis (schistosomiasis), caused by small, parasitic flatworms, which still exists in Egypt today. There seems to have been no syphilis or rickets.