In this section you will find information on the Pyramids and Temples of Egypt, which includes computer-generated reconstructions of what the pyramids and temples might have looked like when they were first built. There are also many interactive ground plan maps, photos, paintings and drawings from my visits to these ancient monuments.

There are a lot of far-fetched speculations about the pyramids as well as the Great Sphinx. Some people even believe they were built by aliens from other worlds! All of the material evidence, though, proves conclusively that they were made by the ancient Egyptians as gigantic burial structures.

The temples were the landowners, the centers of administration, and the possessors of all wealth. For 3,000 years they maintained cultural continuity, upheld the authority of the rulers, and safeguarded the social structure. Eventually they became political powerhouses as well, their high priests wielding as much, if not more, power than the pharaoh himself.

This MAC and Windows App reconstructs the earliest Egyptian temples of reeds and wooden poles, the Old Kingdom stone Sun Temples and the vast temple complexes of New Kingdom. 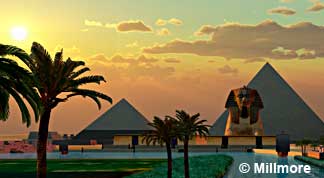 The great pyramids at Giza

Temple of Isis at Philae 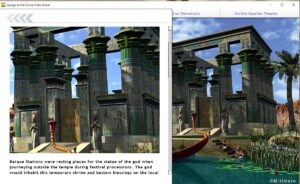