Luxor Temple Dates from around 1392 BC

The modern town of Luxor is the site of the famous city of Thebes (Waset, in ancient Egyptian), the City of a Hundred Gates. It was the capital of Egypt from the twelfth dynasty on (1991 BC) and reached its zenith during the New Kingdom. 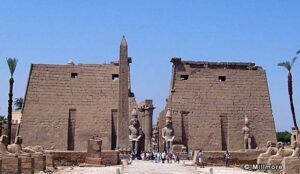 It was from here that Thutmose III planned his campaigns, Akhenaten first contemplated the nature of god, and Rameses II set out his ambitious building program. Only Memphis could compare in size and splendor but today there is nothing left of Memphis: It was pillaged for its masonry to build new cities and little remains.

Although the mud-brick houses and palaces of Thebes have disappeared, its stone temples have survived. The most beautiful of these is the temple of Luxor. It is close to the Nile and laid out parallel to the riverbank.

The temple has been in almost continuous use as a place of worship right up to the present day. During the Christian era, the temple’s hypostyle hall was converted into a Christian church, and the remains of another Coptic church can be seen to the west. Then for thousands of years, the temple was buried beneath the streets and houses of Luxor. Eventually the mosque of Sufi Shaykh Yusuf Abu al-Hajjaj was built over it. This mosque was carefully preserved when the temple was uncovered and forms an integral part of the site today.

Before the building works by Rameses II the northern end of the court was originally the entrance to the temple. It was an enclosed colonnade of seven pairs of 52-foot (16m) high open-flower papyrus columns. It was begun by Amenhotep III and completed by Tutankhamun and still support its huge architrave blocks.

The Court leads into a Hypostyle Hall, which has thirty-two columns. At the rear of the hall are four small rooms and an antechamber leading to the birth room, the chapel of Alexander the Great, and the sanctuary. 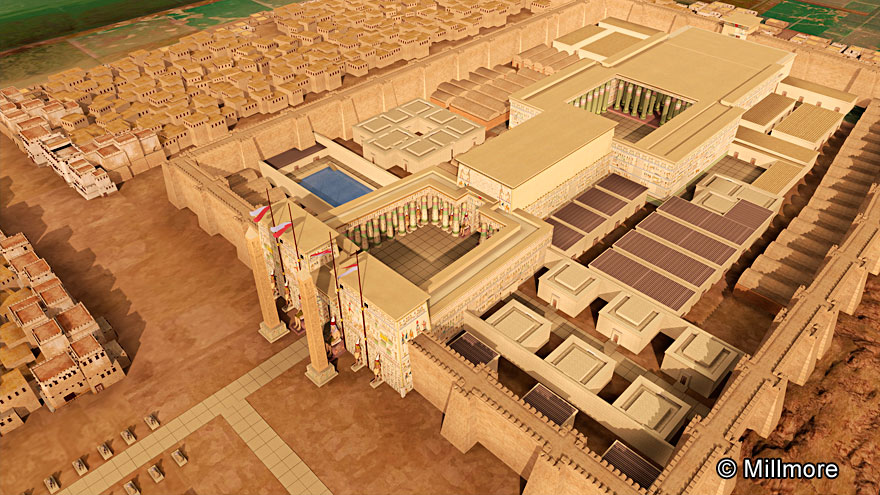