Egyptian Hieroglyphic Alphabet – write your name like an Egyptian

In AD 391 the Byzantine Emperor Theodosius I closed all pagan temples throughout the empire. This action terminated a four thousand year old tradition and the message of the ancient Egyptian language was lost for 1500 years. It was not until the discovery of the Rosetta stone and the work of Jean-Francois Champollion (1790-1832) that the Ancient Egyptians awoke from their long slumber. Today, by virtue of the vast quantity of their literature, we know more about Egyptian society than most other ancient cultures. 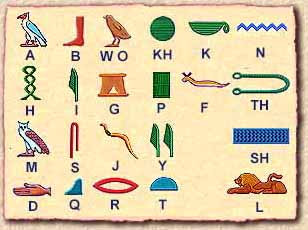 The script was developed about four thousand years before Christ and there was also a decimal system of numeration up to a million.Unlike other cultures the early picture forms were never discarded or simplified probably because they are so very lovely to look at.
Hieroglyphs were called, by the Egyptians, “the words of God” and were used mainly by the priests.

These painstakingly drawn symbols were great for decorating the walls of temples but for conducting day to day business there was another script, known as hieratic This was a handwriting in which the picture signs were abbreviated to the point of abstraction.

Hieroglyphs are written in rows or columns and can be read from left to right or from right to left. You can distinguish the direction in which the text is to be read because the human or animal figures always face towards the beginning of the line. Also the upper symbols are read before the lower. 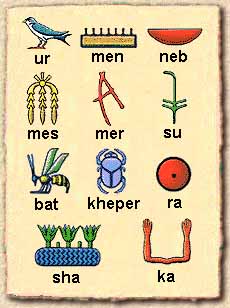