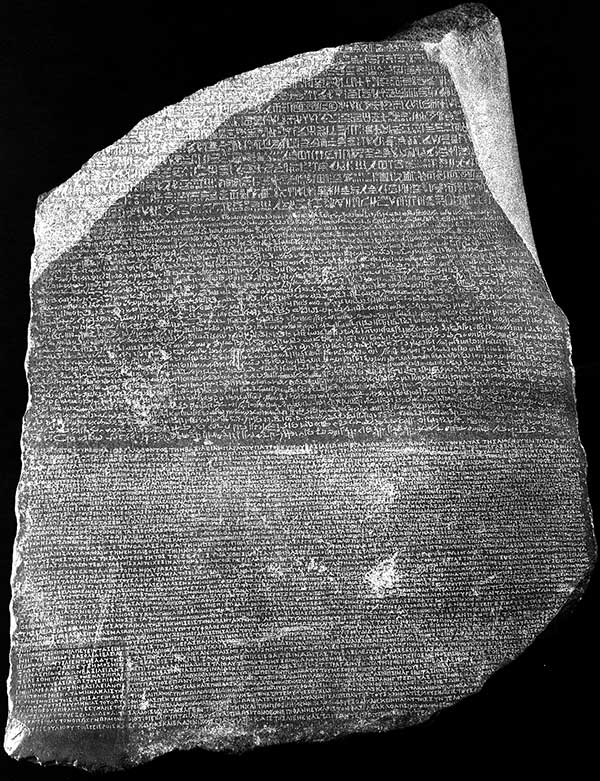 Without the Rosetta stone, we would know nothing of the ancient Egyptians

Beginning with the conquest of Alexander the Great in 332 BC, Greek was the language of the governing elite in Egypt. These Greek rulers could neither speak the language of the people nor read hieroglyphs, and this fueled resentment amongst the population. By  Ptolemy V’s reign in 205 BC the country was in open revolt and the Rosetta stone was one of many that Ptolemy  commissioned as a piece of political propaganda in 196 BC, to state publicly his claim to be the rightful pharaoh of Egypt.

Without the Rosetta stone, we would know nothing of the ancient Egyptians, and the details of their three thousand years of history would remain a mystery. It was discovered by a French captain named Pierre Bouchard in AD 1799, during the Napoleonic wars. Captain Bouchard was supervising the restoration of an old fort near the town of Rosetta when he found a block of basalt 3 ft 9 in. (114 cm) high and 2 ft 4½ in. (72 cm) wide inscribed with three different types of writing. 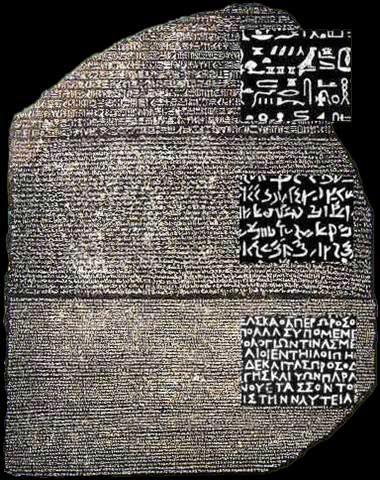 The Rosetta stone is written in two languages; Egyptian and Greek and three writing systems; hieroglyphic, demotic, and Greek.

Captain Bouchard immediately realized its importance to the scholars who had accompanied the French army to Egypt. In fact the Rosetta Stone is probably the most important archaeological artifact in the world today.

After the French surrender of Egypt in 1801, it passed into British hands and is now in the British Museum. The content of the inscriptions is not what makes the stone important; the text is simply a decree listing benefits bestowed on Egypt by King Ptolemy V. But so that all the people could read and understand its content it was written in two languages, Egyptian and Greek. It was also written in three writing systems, hieroglyphic, demotic, and the Greek alphabet and this is what makes the Rosetta stone such an vital discovery.

Since we have never lost our understanding of ancient Greek, the Greek inscriptions provided a key to decoding their Egyptian equivalents. The last sentence of the Greek text says, “Written in sacred and native and Greek characters.” Scholars were quick to figure out that this meant that the same text was set down in three scripts, and that the “sacred” referred to the hieroglyphic system, while the “native” referred to the demotic script of the ordinary Egyptians.

Deciphering the stone was largely the work of two people, Thomas Young of England and Jean-François Champollion of France. Young was a physician, physicist, and all-around genius. He was the first to give the word “energy” its scientific meaning, and is remembered mainly for his study of light. Egyptology was one of his hobbies and he began studying the texts of the Rosetta stone in AD 1814. He correctly identified the cartouche, the oval loop containing hieroglyphs, as the name of King Ptolemy, by finding the corresponding name written in Greek. From this he determined which hieroglyphs spelled the name of Ptolemy. This, in turn, gave him the key to the hieroglyphs for p, t, m, y, and s; and, by examining the orientation of the Egyptians’ bird and animal characters, he also figured out the direction in which the hieroglyphs should be read.

Mystery of the Rosetta Stone

Young’s work was invaluable but he had many other projects on his vigorous mind, and it became clear that the job of cracking the hieroglyphic code called for someone who could focus entirely on the task. That person was Jean-François Champollion, the founder of scientific Egyptology. An historian and brilliant linguist, by the age of sixteen Champollion had mastered not only Latin and Greek but six ancient Oriental languages, including Coptic, the late form of ancient Egyptian that was written phonetically in Greek.

In AD 1821, Champollion started where Young left off, and eventually established an entire list of Egyptian symbols with their Greek equivalents. He was the first Egyptologist to realize that the symbols were not only alphabetic but syllabic, and in some cases determinative, meaning that they depicted the meaning of the word itself. He also established that the hieroglyphic text of the Rosetta stone was a translation from the Greek, not, as had been thought, a translation from Egyptian into Greek. But more importantly, because he understood Coptic he was able to translate the meaning of the ancient Egyptian words.

The work of these two men, especially Champollion, established the basis for the translation of all Egyptian hieroglyphic texts. He  cracked the Hieroglyphic code and instigated the science of Egyptology; enabling us to know the lives of pharaohs as well as ordinary Egyptians who’s letters, written on papyrus, have survived thousands of years in Egypt’s dry climate.