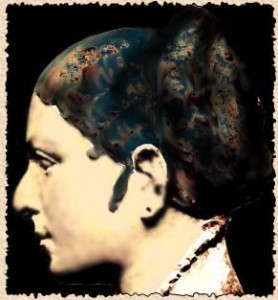 Historical accounts of Cleopatra tell of a beautiful, highly educated woman who was schooled in physics, alchemy, and astronomy, and could speak many languages. Her voice, said the Greek biographer Plutarch, “was like an instrument of many strings, which could pass from one language to another.”

Cleopatra was of Macedonian descent and not a native Egyptian. She was the second daughter of King Ptolemy XII and the last sovereign of her dynasty, which had been founded by Alexander’s general, Ptolemy, in 326 BC. She came to power in 51 BC, at the age of seventeen, and was married to her eldest brother, Ptolemy XIII. He attempted to murder her and seize power for himself but she escaped safely into Syria and later returned with an army.

Either Cleopatra or Ptolemy could gain a decisive advantage until the Romans entered the picture. Egypt was the largest supplier of grain to Rome and so that the grain supply was not disrupted it was vital that the country be politically stable. However, Cleopatra and Ptolemy’s struggle for power coincided with the Roman generals Pompey and Caesar’s own rivalry and, after his defeat at the battle of Pharsalus, Pompey fled to Egypt hoping to seek sanctuary.

Ptolemy miscalculated; he hoped to please Caesar by having Pompey beheaded, but Caesar was sickened by the dishonorable manner of Pompey death and sided with Cleopatra. Ptolemy then attacked the small Roman garrison on the Island of Pharos, intending to drive Caesar out of Egypt.

Caesar set fire to the Egyptian fleet in the harbor but the flames spread to the city and the great library, which held over a million unique books, the largest collection in the ancient world. It was destroyed, Ptolemy was drowned during the battle and Cleopatra became the undisputed ruler of Egypt.

Caesar was the dictator of Rome, and although Egypt was rich, Rome was a world military power. This fact wasn’t lost on Cleopatra, so she pursued the great man. For his part, Caesar needed money and Egypt could supply his needs. So, out of both a strong personal attraction and mutual interest, the two became lovers. Together, they sailed up the Nile visiting the ancient monuments, and Caesar was fascinated by ancient Egypt whose history was, at that time, over two thousand four hundred years older than Rome’s.

Eventually, Caesar returned to Rome leaving Cleopatra pregnant. She gave birth, in 46 BC, to a boy whom she called Caesarion and in 45 BC, she visited Rome. Her wealth and sophistication caused jealousy among the Roman nobility and the Senate became suspicious of Caesar’s intentions, believing that he wanted to make himself a king so they murdered him.

Cleopatra’s hopes of influence and power were dashed when Caesar was assassinated. She returned to Egypt where she concentrated on building up the economy and consolidating her power. Her first act was to have her younger brother poisoned so that she could elevate her son, Caesarion, in his place.

In 42 BC, at the Battle of Philippi, Caesar’s assassins were routed and the Roman Empire was divided between Mark Antony and Caesar’s great-nephew Octavian. Octavian ruled in the West and Mark Antony took charge of the Eastern Empire where he planned an invasion of Persia. But he needed money for this venture and saw the wealth of Egypt as the key to success so he sent a message for Cleopatra to meet him at the city of Tarsus in Asia Minor.

She was delighted because here was a second chance to achieve her ambition of making Egypt a great power again. She had known Mark Antony when he’d been a young staff officer in Egypt with Caesar and now, age of twenty eight, she was completely confident in her powers. She delayed her departure, took her time, then sailed into Tarsus in a great golden barge and entered the city in an extravagant show of style loaded with gifts.

Antony was so captivated by her that he decided to put off his Parthian campaign; he returned to Alexandria with Cleopatra, where he lived a life of pleasure until in 40 BC when he return to Italy, where he concluded an agreement with Octavian over power sharing. As part of this settlement he married Octavian’s sister, Octavia.

Three years later Antony once again took up his postponed Parthian campaign and needed money so he returned to Cleopatra to get finance for the campaign, which ultimately ended in failure.

Meanwhile, Octavian regarded Antony and his Egyptian power base as a threat to Rome’s dominance of the Mediterranean world and he waged a propaganda campaign against Antony. Antony made what was to prove a fatal step; he married Cleopatra. The union was an insult to his wife Octavia and her brother Octavian, but even worse, the marriage united all of Rome against him.

During Antony’s absence, Cleopatra had made her own critical mistake in foreign policy towards Herod of Judaea. Herod and Antony were old friends but Cleopatra tried, unsuccessfully, to seduce Herod on his way through Egypt. Her vanity got the better of her and she never forgave him for the rejection.

She later persuaded Antony to give her large portions of Syria and Lebanon and even tried to get the rich balsam groves of Jericho, part of Herod’s own kingdom. However, Antony refused to give her Jericho, which only inflamed her hatred of Herod. She then interfered in Herod’s unhappy family affairs by conspiring against him with the women in his household. This act came back to haunt her; when she needed Herod’s help against Rome, he would not give it.

In 34 AD, Antony celebrated a great triumph in Alexandria. The crowds saw Antony and Cleopatra seated on golden thrones with their own three children and Julius Caesar’s son, Caesarion. Antony proclaimed Caesarion to be Caesar’s son, thus diminishing Octavian’s status as Caesar’s adopted heir. Octavian responded by confiscating Antony’s will from the temple of the Vestal Virgins in Rome, to whom it had been entrusted. He then leaked its contents to the Roman people, who were outraged at Antony’s plans to bequeath his Roman possessions to this foreign woman and to transfer the capital from Rome to Alexandria.

The Roman Senate finally declared war against Cleopatra and on September 2, 31 BC, at the naval Battle of Actium, Octavian defeated the combined forces of Antony and Cleopatra.

Cleopatra fled with her forces at the height of the battle. When it really mattered, her judgment was questionable and this fact, along with Antony’s reckless, drunken behavior, doomed them to failure against the cold, calculating Octavian.

Cleopatra retreated to her mausoleum and had a message sent to Antony saying she was dead. He was so devastated he committed suicide by falling on his sword.

Octavian eventually entered Egypt, and Cleopatra tried once again to captivate the most important Roman but Octavian was not moved. He wanted to embellish his triumph by having her and her children dragged through the streets of Rome in chains. Rather than suffer such humiliation she sent him a letter asking that she might be buried with Antony, and then committed suicide by allowing a snake to bite her. Plutarch describes the scene, saying that she was found “stone dead, lying upon a bed of gold, set out in all her royal ornaments.”

Cleopatra was thirty-nine when she died in 30 BC. She’d been a queen for twenty two years and was buried with her lover, Antony. Her high ambitions together with her arrogance ruined Egypt’s future prospects of independence. While she might have of achieved client status for Egypt within the Roman Empire, her utter failure condemned her country to becoming a mere province of Rome. And yet, this extraordinary woman is one of the most famous in history. Together with Caesar, Antony, and Octavian (who later became the Emperor Augustus), she played a crucial part in shaping the affairs of western civilization and the course of history. The Greek historian Dio Cassius said of Cleopatra, “She captivated the two greatest Romans of her day, and because of the third she destroyed herself.”

The Ancient Egyptians in their own words