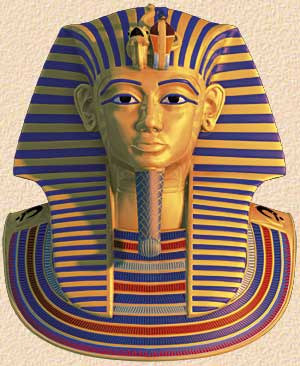 It is ironic that the Egyptian king who is most famous today was a little known and unimportant pharaoh in his own time. He had no real power, his impact on Egyptian history was trivial, and the modest works carried out during his short reign were taken and renamed by his successors.

We have many of the objects he owned and yet we know almost nothing about what sort of person he was. What we do know is fragmentary, and until material evidence is found we can only speculate on the story of his life.

We know that he lived his early life in the city of Akhetaten. It is possible that he was the son of Lady Kiya, who is thought to be a Mitannian princes and a wife of Akhenaten. It is likely that she died giving birth to him. He might also have been the brother or half brother of Smenkhkara, his immediate predecessor.

Towards the end of Akhenaten’s reign, senior court officials like the civil servant Ay and the commander of the army Horemheb realized that the empire, and indeed Egyptian society, was disintegrating. Akhenaten’s coregent, Smenkhkara left the new city of Akhetaten and moved the administration back to Memphis where he made contact with members of the old, outlawed, priests of Amun in an attempt to rescue the situation, but he died unexpectedly.

Later after Akhenaten’s death Tutankhaten, as he was then called, was crowned at Mamphis. He was only nine years old at the time, and had few close relatives left alive. His wife, Ankhesenpaaten, was older, and he was probably the political puppet of Ay and Horemheb. Under their guidance, he changed his name to Tutankhamun; restored Amenhotep III’s Theban palace; issued a decree restoring the temples, images, and privileges of the old gods; and admitted the errors of Akhenaten’s political and religious policies.

During Tutankhamun’s ninth year, Horemheb marched the army into Syria to assist Egypt’s old ally, the Mitannian kingdom of northern Syria, which was embroiled in hostilities with vassals of the Hittites. It was around this time that Tutankhamun died. He was eighteen, and modern medical analysis of his mummy shows that he may have received a blow to the head, but we can only speculate as to whether he was murdered or the victim of an accident such as a fall from his chariot. A number of well-preserved chariots were found in Tutankhamun’s tomb and, like most Egyptian kings, it seems he was an enthusiastic charioteer.

There is an interesting postscript to the story of Tutankhamun, which gives a clue to the power struggles after his death. Ankhesenamun, Tutankhamun’s wife, was left a widow and in a difficult position. She found herself surrounded by older, ambitious men, such as Ay and Horemheb, who were competing for power. In order for one of them to legitimize his claim to the throne, he would have to marry young Ankhesenamun, the only surviving member of her dynasty.

From letters found in the Hittite archive, we know that she had no particular affection for her aged Egyptian suitors and it is easy to sympathize with this young widow’s predicament. She wrote to Suppiluliumas I, the Hittite king, asking him to send one of his sons for her to marry, promising that she would make him pharaoh of Egypt. The Hittites, being old enemies of Egypt, were at first suspicious of this offer and in Egypt, Ankhesenamun’s behavior was considered nothing short of treason. Suppiluliumas eventually sent prince Zannanza, but the young prince was murdered at the Egyptian border.

Ankhesenamun was then forced to marry Ay, who, eight months after the death of Tutankhamun, became king. Traditionally a king was buried seventy days after his death, but it is possible that Tutankhamun lay unburied for eight months while the political plotting and maneuverings were being played out.

Ankhesenamun rapidly disappears from the records after her marriage to Ay and her name was hacked out of some monuments and we can only imagine her fate after her attempt to bring a foreigner to rule Egypt.

Ay was king for only four years then succeeded by Horemheb and although the records state the eighteenth dynasty ended with Horemheb, Tutankhamun was in fact the last member of his family to rule Egypt.

It was a sad end for a family who expelled the invading Hyksos from Egypt and produced such a great cast of characters such as Hatshepsut the woman king, Thutmose III, the Napoleon of Egypt, Thutmose IV, the young man who dreamt of the sphinx and became king, and Amenhotep III the sophisticated, refined king who brought forth a crazy, flamboyant genius of a son, Akhenaten.

The Discovery of Tutankhamun’s Tomb

The Egyptologist Howard Carter had worked in Egypt for 31 years before he found King Tutankhamun’s tomb. He began his career in Egypt at the age 17 copying wall paintings and hieroglyphic inscriptions and in 1899 was appointed the Inspector-General of Monuments in Upper Egypt.

In 1905 the Earl of Carnarvon, who spent the English winters in Egypt, hired Carter to direct archaeological digs. After several moderately successful seasons working together, interrupted by World War I, they began working in Valley of the Kings in 1917.

Carter had found a faience cup, a piece of gold foil, and a cache of funerary items which all bore the name of Tutankhamun and was convinced there was still an undiscovered royal tomb to be found in the Valley. He began a systematic search but only found some ancient workmen’s huts at the foot of Rameses VI tomb and 13 calcite jars at the entrance to the tomb of Merenptah. After five years of excavating in the Valley he did not have much to show and Lord Carnarvon decided to end the search. But Carter persuaded Carnarvon to finance just one last season in 1922.

He began by removing the workmen’s huts at the base of Rameses VI tomb and after four days found a step that had been cut into the rock, which lead to a staircase descending to a blocked entrance.

Carter had the stairs filled in, to hide the find, and deployed several of his most trusted workmen as guards. He then sent a cable to Lord Carnarvon in England “At last have made wonderful discovery in Valley a magnificent tomb with seals intact recovered same for your arrival congratulations.”

They noticed that the upper left of the doorway had been damaged, most probably by tomb robbers but this showed signs of repair. The doorway was removed revealing a passageway filled with limestone chips which tomb robbers had dug through but the hole had been refilled with larger, darker rocks which suggested that the tomb had been raided but then repaired in antiquity.

A 26-foot-long passageway was cleared exposing another sealed door and again, there were signs that a hole had been made in the doorway and then resealed.

Carter wrote “With trembling hands I made a tiny breach in the upper left-hand corner. Darkness and blank space, as far as an iron testing-rod could reach, showed that whatever lay beyond was empty, and not filled like the passage we had just cleared. Candle tests were applied as a precaution against possible foul gases, and then, widening the hold a little, I inserted the candle and peered in, Lord Carnarvon, Lady Evelyn and Callender standing anxiously beside me to hear the verdict. At first I could see nothing, the hot air escaping from the chamber causing the candle flame to flicker, but presently, as my eyes grew accustomed to the light, details of the room within emerged slowly from the mist, strange animals, statues, and gold – everywhere the glint of gold. For the moment – an eternity it must have seemed to the others standing by – I was struck dumb with amazement, and when Lord Carnarvon, unable to stand the suspense any longer, inquired anxiously, “Can you see anything?” it was all I could do to get out the words, “Yes, wonderful things.”

The Ancient Egyptians in their own words