Taharqa was the fourth king of the Twenty-fifth Dynasty and also king of his native Kush; located in Northern Sudan. The remains of this huge kiosk, built by 25th Dynasty pharaoh Taharqa (690-664 B.C.) originally consisted of ten twenty-one meter high papyrus columns linked by a low screening wall. Today there is only one great column still standing. It is believed that it was a barque chapel (or Station) although some Egyptologists think it may have been used in ritual activities to join with the sun

The king wears the nemes headdress with the double crown of Upper and Lower Egypt and his arms are crossed, holding crook and flail; symbols of kingship. At his feet, Princess Bent’anta holds a flower and wears an Uraeus crown of rearing cobras. Her name Bent’anta (Bintanath, Bint-Anath, Bintanat) is Syrian, meaning Daughter of Anath, referring to the Canaanite goddess Anath. Her mother was Isetnofret, one of Ramesses’s most important wives. 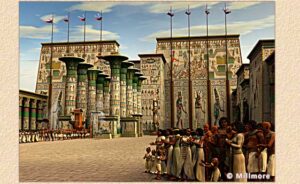 Before the later Shoshenq court is the second pylon. It was built by Horemheb (1323-1295 B.C.) who filled the interior of the pylon with thousands of stone blocks from demolished monuments built by the Heretic king, Akhenaten. But it was unfinished and only partly decorated at his death. Ramesses I later completed the decoration and replaced all of Horemheb’s cartouches with his own and it was again usurped by his grandson Ramesses II. Today the second pylon’s outer wall is severely damaged and its original height is unknown.